The legendary hip-hop girl group TLC produced a number of hits in the 90s, but perhaps none so iconic as “Waterfalls”, which many know for the infectious chorus that goes “don’t go chasing waterfalls”.

The song was released on May 29th, 1995, as the third single from their 1994 album CrazySexyCool. It was an instant hit upon release, spending seven consecutive weeks at the top of the Billboard Hot 100.

“Waterfalls” was written Marqueze Etheridge and Organized Noize, with a rap verse contributed by TLC member Lisa “Left Eye” Lopes. The song’s concept was inspired by the Paul McCartney song, “Waterfalls”, which opens with the lyric “Don’t go jumping waterfalls.”

The phrase itself, “don’t go chasing waterfalls” refers to self-destructive and unsafe behavior, encouraging people to stick to the “rivers and the lakes that you’re used to”.

While that may sound like TLC are trying to steer people away from following their dreams, think about what happens when you chase a waterfall — sure, it’s beautiful, but then you fall right off a cliff.

When you listen casually, singing along to that catchy hook, you may not notice the serious subject matter discussed in the lyrics, but after a few more listens the serious tone begins to slip past the glossy delivery.

TLC’s “Waterfalls” addresses issues that primarily affect young people like drug dealing and HIV/AIDs. In fact, “Waterfalls” was the first number one single to address the HIV/AIDs issue.

The group does so in a way that sheds light on the feelings associated with living through these things, while also inspiring hope for a better future. They aren’t discouraging people from chasing their dreams, but rather encouraging safety.

TLC felt strongly about the AIDs epidemic, and were noted supporters safe sex in more ways than just their music. Lisa “Left Eye” Lopes was even known to incorporate condoms into her fashion to encourage fans to use them.

Lopes sadly passed away in a car accident in 2002. She reportedly had some lyrics from her verse on “Waterfalls” engraved on her casket.

“Waterfalls” stands true as one of the most memorable pop songs from the 90s, with a lasting impact and a powerful message that is still culturally relevant today. Watch the music video below. 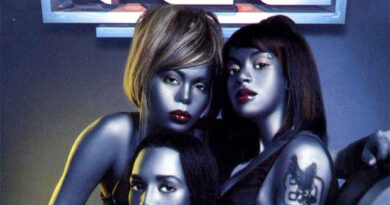 The Meaning of TLC’s “No Scrubs”