“Knockin’ On Heaven’s Door” is one of the most often-covered songs in Bob Dylan’s extensive catalog of frequently-covered songs.

Originally written in 1973 to be used in Sam Peckinpah’s western Pat Garrett and Billy the Kid, the song is a lyrical masterpiece that has resonated in many hearts over the years.

Dylan released “Knockin’ On Heaven’s Door” as a single shortly after the song’s appearance on the movie soundtrack, with the B-Side being “Turkey Chase”.

The track climbed the Billboard charts and eventually peaked at number 12, making it a success in its own time, however its legacy only grew from there, and today it is regarded as one of the best sad songs of all time.

In 1975, Eric Clapton offered his own take on the song, first contributing guitar on Arthur Louis’ reggae-infused version of the song and later recording his own version.

During the late 1970s and 1980s, the Jerry Garcia Band frequently had the song in rotation, and the Grateful Dead also picked it up in the 90s. R&B singer Randy Crawford also released a cover of the song, and many more.

Most famously, though, “Knockin’ On Heaven’s Door” was released as a cover in 1990 by the rock band Guns ‘N’ Roses, though they had been playing the song live as early as 1987.

Their version is perhaps even more popular than Dylan’s original, becoming an international hit for the band in the early 1990s.

Lyrically, the meaning of “Knockin’ On Heaven’s Door” can be directly interpreted by lining the song up with the scene of the movie for which it was originally written, Pat Garett and Billy the Kid, which you can watch below.

The scene depicts a shootout between law enforcement officers and Billy the Kid’s old gang, which results in the Sheriff Colin Baker (Slim Pickens) being shot multiple times.

The Sheriff goes to the lake to meet his death, and his wife walks over after the gunfight. Their encounter is quite touching as “Knockin’ On Heaven’s Door” plays in the background.

“Mama take this badge from me, I can’t use it anymore,” Dylan sings. “It’s getting dark, too dark to see. Feels like I’m knockin’ on heaven’s door.“

The song features only two short verses, which are of course in line with the plot of the movie, as the dying Sheriff is referring to his wife as Mama at the time of his death, but also describe death in the line of duty with a touching quality.

For this reason, “Knockin’ On Heaven’s Door” has rung true in the hearts of many whom have lost loved ones in this way, whether they be police officers, firefighters, or even veterans, and thus has found meaning well outside the movie in which it originally appeared.

“Mama put my guns in the ground, I can’t shoot them anymore,” Dylan sings in the second verse. “That cold black cloud is comin’ down. Feels like I’m knockin’ on heaven’s door.”

Dylan’s lyrics bring to mind the idea that whatever cause seemed like it was worth dying for may not feel the same way in the actual moment of death. There is a peaceful sentiment floating over the song, which fits both with the theme of death and the solemn message conveyed by the lyrics.

Listen to Bob Dylan’s original verison of “Knockin On Heaven’s Door”, as well as covers by Guns ‘N’ Roses, Eric Clapton, Randy Crawford, and the Jerry Garcia Band below. 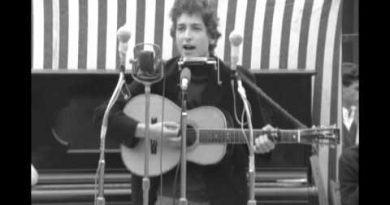