While Bruce Springsteen’s “Born in the U.S.A.” may sound and feel like a happy, patriotic anthem, the lyrics paint a picture that is much more grim.

However, since many listeners only pay attention to the bombastic chorus, which certainly does sound pro-America, “Born in the U.S.A.” has become one of the most frequently misunderstood songs of all time.

Released in 1984 as the opening and title track to Springsteen’s most commercially-successful album, Born in the U.S.A., the song is highly critical of America and specifically of the way that the country handled the Vietnam War.

The lyrics depict a Vietnam veteran who was born to a working class family, enlisted in the army to avoid jail time, and returned home to find loneliness and despair at every turn.

Springsteen initially wrote “Born in the U.S.A.” in 1981, after director Peter Schrader asked him to write a song for a movie that he had been working on, which he had hoped Bruce would play the lead role in.

The film, of course, was to be called Born in the U.S.A., with a plot line about a blue-collar bar band.

At the time, Springsteen had been working on a track that was supposed to be called “Vietnam”, and he shifted gears a bit to make it fit the title “Born in the U.S.A.”, and the legendary anti-anthem was created.

However, while Bruce did pen the song with the intent to use it for the film, he eventually turned down the role.

As a result, Schrader renamed the film Light of Day, and the lead role went to Michael J. Fox. It was released in 1987, and did not include “Born in the U.S.A.” but rather another Springsteen-penned song, “(Just Around the Corner to the) Light of Day”, recorded by Joan Jett.

In the liner notes for Born in the U.S.A., Springsteen extends his sincerest thanks to Paul Schrader for helping to inspire the song.

“Born in the U.S.A.” Lyrics Meaning

Now let’s take a closer look at the lyrics and see what they’re all about, starting with the first verse:

First verse to “Born in the U.S.A.” by Bruce Springsteen.

Though the arrangement is upbeat and the drums drive the song forward with gusto, right from the jump the lyrics take a dark tone.

Springsteen sings about being “born down in a dead man’s town,” meaning that he entered the world with a lousy set of circumstances, in a place that didn’t offer much opportunity for growth and advancement. He could be saying that the town is either boring or dangerous.

Either way, he’s been kicked around since birth, beaten down so bad that he’ll spend the rest of his life just nursing his wounds.

Still, we roll into the chorus with a glorious energy, because we’re:

Chorus to “Born in the U.S.A.” by Bruce Springsteen.

After such a dreary introduction, the chorus is nothing but ironic. Yet it sounds magnificent, and it leads us into the second verse, which goes deeper into the story of our narrator:

Second verse to “Born in the U.S.A.” by Bruce Springsteen.

Springsteen sings of how he got in trouble with the law, and instead of sending him to jail they sent him off to Vietnam to “kill the yellow man.”

This story has a basis in reality, as there are many reports from the Vietnam era that suggest judges would insist that young men who committed crimes enlist in the military. Thankfully this practice, for the most part, is forbidden in all branches of the armed forces today.

Of course, there was also a military draft during the Vietnam War, and President Johnson was pulling hard for more men to enlist and go fight the Viet Cong.

After this criticism of extortion by the United States justice system, we have another hit of the booming chorus before heading into the third verse.

This takes place after the young man returns home from the war:

Come back home to the refinery
Hiring man says, “Son if it was up to me”
Went down to see my V.A. man
He said, “Son, don’t you understand”

Third verse to “Born in the U.S.A.” by Bruce Springsteen.

When he returns home, he tries to get a job in a refinery and is turned away. Then, he heads down to the office of Veteran’s Affairs, where he is also turned away.

Being treated poorly was a common experience for veterans returning home from Vietnam. Many on the homefront did not support the war, and blamed the veterans themselves for the things that happened, rather than the leaders who sent them overseas in the first place.

We can also hear the influence of Springsteen’s home state of New Jersey here, as the state is known for its oil refineries. The refineries offer high-paying, hard-working jobs that are highly sought after and not easy to get.

In the fourth verse, he recalls a sibling or friend who did not make it back:

I had a brother at Khe Sanh
Fighting off the Viet Cong
They’re still there, he’s all gone
He had a woman he loved in Saigon
I got a picture of him in her arms now

Fourth verse to “Born in the U.S.A.” by Bruce Springsteen.

This “brother” of Springsteen’s fell in love with a woman in Saigon, and now all he’s got is a picture of the two of them happily together.

It’s of note that Springsteen twisted up the facts a bit with this verse. The Battle of Khe Sanh was against the North Vietnamese army and not the Viet Cong.

The fifth and final verse shows our veteran ten years down the line, still in a bad way:

Fifth verse to “Born in the U.S.A.” by Bruce Springsteen.

We picture our veteran somewhere between a jail cell and an oil refinery, ten years removed from his service and still feeling lost and dejected.

This is another possible reference to New Jersey, as the Bayway Refinery and East Jersey State Prison are roughly 15 minutes apart.

With the lyric “Nowhere to run ain’t got nowhere to go,” Springsteen may be referencing his popular 1975 album Born to Run. It also may be a nod to the song “Nowhere to Run” by Martha Reeves and the Vandellas, which was popular during the time of the war.

“Born in the U.S.A.” ends with one final chorus, the biggest one yet. We wave that flag and hang our heads in shame, while fist-pounding to the beat of the drums.

Watch the music video for “Born in the U.S.A.” below.

“Born in the U.S.A.” Political Use

Now that you know the meaning of “Born in the U.S.A.”, you’ll understand even more the irony of this song being used in right-wing political campaigns.

In 1984, while running for re-election not long after the song’s release, President Reagan jumped on the bandwagon to say that Springsteen was putting forth a message of hope for the American people in his song.

This prompted quite the reaction in the media, with many suggesting that Reagan had never even heard a Springsteen song, much less knowing that “Born in the U.S.A.” was really about.

Starting during his campaign in 2016, President Donald Trump played the song at his rallies. It was also played by his supporters outside of the hospital when he had COVID in October 2020.

If only they knew… 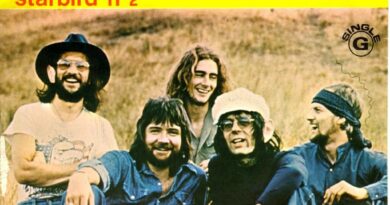