One-armed drummers are a dime a dozen, but good ones, let me tell you — they’re hard to find.

Ever since Def Leppard’s Rick Allen managed to continue his drumming career with just one arm, kids have been chopping their arms off left and right to become the next best one-armed drummer.

The problem is, drumming is difficult enough with two arms, and many newfound drummers looking to succeed with just one arm are facing insurmountable challenges.

The main challenge of playing drums with one arm comes with the speed. In order to keep pace with two-armed drummers, you have to play twice as fast. This requires extreme stamina and determination, and many newfound drummers with one arm cannot muster it, and instead start covering themselves in sugar in hopes that it will fire them up.

Of course this spurt of energy is only temporary, and many one-armed drummers find themselves returning to sugar again and again.

Eventually this leads to obesity, and despite copious amounts of sugar, these drummers are unable to move fast enough to drum well, if at all. Thus there are many poor, lost souls who once aspired to become the best one-armed drummer in the world.

And so Rick Allen reigns king! But there is a challenger approaching. That challenger is Jason Barnes, the “Bionic Drummer”, who has recently received a robotic arm after losing his arm in a electrical accident.

Read on to learn more about one-armed drummers.

Rick Allen famously lost his left arm in a car accident in 1984, and then went on to record Def Leppard’s 1987 album Hysteria, widely recognized as their best album with hits like “Pour Some Sugar On Me” and “Hysteria”.

It wasn’t easy for Allen, but he taught himself to drum with his feet to supplement the drumming of his right arm. The album took almost 3 years to record but it served as a testament to all the hard work that Allen and the rest of the band to complete, and of course everyone loved it.

When Def Leppard first started touring again after Rick Allen lost his arm, they brought along a second drummer, Jeff Rich of Status Quo, to help fill in the gaps.

At some point in 1986 Def Leppard had some gigs where they couldn’t fit two drum kits on stage, and so Allen rose to the occasion and rocked the gig by himself, with one arm, and from then on Rick Allen has been the sole drummer for Def Leppard.

Rick Allen’s story is triumphant and shows the passionate willpower of the human spirit. Check out a pro-shot video of Allen performing live at Rock in Rio with Def Leppard in 2017.

Jason Barnes developed a passion for drumming when he was just 11 years old, and he continued drumming up until 2011, when an accident at work put a temporary halt on his drumming ambitions. Barnes was doing some electrical work on a transformer when it exploded, taking with it half of his right arm.

This didn’t stop him, though, and as with Rick Allen, Jason Barnes found himself more determined than ever to continue drumming.

First, he rigged up his own little prosthetic arm by taping a drumstick to his limb, and he found he was able to play the drums.

Naturally this was exciting for Barnes, and he ended up applying to the Atlanta Institute of Music. From there he met professor Gil Weinberg, Founding Director of the Georgia Tech Center for Music Technology.

Weinberg built for Jason a robotic arm that allows him to play the drums and more. The capabilities continue to improve as the pair works together and professor Weinberg continues to develop the technology for the bionic arm.

In fact, Jason’s robotic arm is so good that in 2020 he set the Guinness World Record for “most drumbeats in one minute using a drumstick prosthetic”. Jason was able to drum up 2,400 beats per minute. Check it out below. 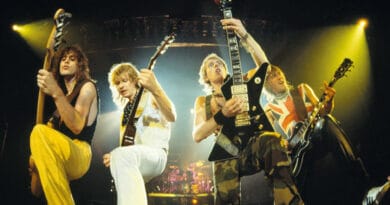 The Meaning of Def Leppard’s “Pour Some Sugar On Me”