Def Leppard’s “Pour Some Sugar On Me” is one of the most iconic songs to come from the 80s hair metal craze.

Appearing on the band’s 1987 album, Hysteria, “Pour Some Sugar On Me” was a massive hit, reaching number two on the Billboard Hot 100, and helped bring the album to the top of the charts in the USA.

Today, the bombastic “Pour Some Sugar On Me” is seen as the quintessential Def Leppard song, and listeners have danced to it and debated its meaning for decades.

The lyrics are clearly sexual, or at least written with sex on the mind. However, there isn’t exactly a sexual act that involves pouring sugar on your lover, and even if there was, it wouldn’t be very enjoyable.

Thus we must assume that the lyrics are not meant to be taken literally, and the phrase “pour some sugar on me” is metaphorical for having a good time.

Sugar is sweet and lovable, and the idea is that this woman he is dancing with, and then going home to spend the night with, has these qualities, too.

Chorus to “Pour Some Sugar On Me” by Def Leppard.

All of the song’s verses contain sexual innuendos that imply this woman is a freak, and that Elliot has been waiting for the chance to take her home for quite some time.

While “Pour Some Sugar On Me” feels like an effortless hit, Def Leppard went through a difficult period during the creation of Hysteria that almost led to the album being scrapped.

For one, their drummer Rick Allen lost his arm in a car wreck in 1984, just a few months after they wrapped up touring their successful 1983 album, Pyromania.

Instead of giving up his career as a drummer, Allen famously taught himself how to play the drums with one arm. He managed to re-learn all the songs and record new material in the studio, and on top of that he still performs live to this day.

Rick Allen’s accident wasn’t the only setback for the band, though, and a number of studio delays and false starts meant that they had sunk almost $5 million into Hysteria when it was all said and done.

“Pour Some Sugar On Me” almost didn’t make the album, as it wasn’t initially written as part of the material for the album. It came out of an acoustic guitar melody being strummed by Joe Elliot during some downtime, and producer Robert “Mutt” Lange insisted that they turn it into a song.

According to a 2016 interview with Louder Sound, Lange said: “‘That’s the best hook I’ve heard in five or 10 years. We should absolutely do this song.’ And, of course, I was thinking there was no way the guys were gonna go for it.”

There was some hesitation as the band was already burnt out from nearly three years of working on the album, and there were concerns that another song would add another six months to production time.

However, “Pour Some Sugar On Me” came together rather quickly, and Elliot recalls them having it finished in 10 days. Good thing they did, too, because it went on to be the best-selling single of their career.

Upon release, the Hysteria didn’t chart as well as they had hoped, and album sales weren’t high enough to cover those hefty production costs. The album was looking like a loss, and Def Leppard were about to become rock memories.

Mercury Records didn’t even think to put “Pour Some Sugar On Me” out as a single, choosing instead to go with “Women” as the lead single followed by “Animal” and “Hysteria”, one of which had impressive results.

Eventually, as one final effort to salvage sales on what was looking like a failed album, they dropped “Pour Some Sugar On Me” and MTV took the single to number two and launching the album to the top of the charts.

Guitarist Phil Collen remembers when the song made it big, and also shows appreciation for the ladies who love the song, in that same Louder Sound interview:

The song became a hit because strippers in Florida started requesting it on the local radio station. It had a second lease of life. Hysteria was all over bar the shouting, and then all of a sudden this song just got popular, and then the album went to Number One. It’s really funny how it suddenly became cool because it was a stripping song.

I still get a buzz from it. For some bizarre reason, in America women seem to feel compelled to take their shirts off when we play it. “Pour Some Sugar On Me” is like anything; if you’re rehearsing it in the rehearsal room, it’s really fucking boring. But as soon as you play it in front of an audience who are into it, it makes all the difference.

Phil Collen on “Pour Some Sugar On Me”.

Listen to the stripper song that almost never was, “Pour Some Sugar On Me” by Def Leppard below. 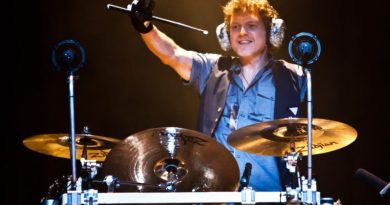 The Best One-Armed Drummers of All Time