Not many know that the song “Blinded by the Light”, made famous by British rockers Manfred Mann’s Earth Band in 1976, was actually written and initially released by Bruce Springsteen on his 1973 album Greetings From Ashbury Park, N.J.

Released as the opening track on the seventh studio album from Manfred Mann Earth Band, The Roaring Silence, “Blinded by the Light” became a number one hit in America.

This is ironically the only song written by Bruce Springsteen to ever reach number one on the Billboard Hot 100, with 1984’s “Dancing in the Dark” coming in close second when it reached number two.

Springsteen’s own version of the song did not get the same attention as the Manfred Mann version, and in fact it did not even make the charts despite being released as a single.

Perhaps this was because Springsteen’s version isn’t quite as catchy, but it’s more likely because everybody was wondering why Manfred Mann was singing about feminine hygiene products, and if I know Americans — probably belting out the falsely-perceived lyric at the top of their lungs: “Wrapped up like a douche, another runner in the night!”

Manfred Mann himself spoke about this, and his thoughts on how Springsteen may have felt about the song, in a 2007 interview with Record Collector Magazine:

I don’t think Springsteen liked our Blinded By The Light, ’cos we sang ‘wrapped up like a douche’, and it wasn’t written like that and I screwed it up completely. It sounded like ‘douche’ instead of ‘deuce’, ’cos of the technical process – a faulty azimuth due to tape-head angles, and it meant we couldn’t remix it.

Warners in America said, ‘You’ve got to change ‘douche’, ’cos the Southern Bible belt radio stations think it’s about a vaginal douche, and they have problems with body parts down there.’ We tried to change it to ‘deuce’ but then the rest of the track sounded horrible, so we had to leave it. We just said, ‘If it’s not a hit, it’s not.’

But in the end, it was No. 1 in America, and so many people came up to us after and said, ‘You know why it made No. 1? … Everyone was talking about whether it was deuce or douche.’ Apparently Springsteen thought we’d done it deliberately, which we hadn’t, so if I ever saw him I’d avoid him and cringe away like a frightened little boy.

Manfred Mann on the famous “douche” lyric from “Blinded by the Light”.

In 2005, Bruce Springsteen also spoke about the song during his VH1 Storytellers concert. He discussed the meaning of the lyrics, as well as the Manfred Mann cover that became infinitely more famous. He joked about how the Earth Band changed the lyric from “deuce” to “douche”, and how that is why the song skyrocketed.

You can watch him talk about this lyric, and the rest of the lyrics in the video below. Starting around 2:15 for his comments on Manfred Mann’s version.

Now, let’s dig into the lyrics, which tell an exciting tale of youthful energy and ambition. Springsteen explains in the video above that these lyrics are mostly autobiographical, with a bit of imagination thrown in. He was young and hungry, and he wanted to do something different with his songwriting.

Since Manfred Mann’s Earth Band’s version is more famous, we’re going to analyze the lyrics as they sang them, using some insight provided by Springsteen.

Here we go with the infamous opening lines:

Intro lyrics to “Blinded By The Light” by Manfred Mann’s Earth Band.

In Springsteen’s version, this lyric goes, “Cut up like a deuce,” which is a reference to a Little Deuce Coop, a 2-seater hot rod.

This a metaphor for his mind reeling fast, with the “Blinded by the Light” lyric being a reference to the wide world in front of you, with endless possibilities and dreams of the spotlight.

Manfred Mann’s official lyrics have the same meaning, but the lyrics that we all hear on the song give it a much different meaning, one that is quite dirty (or clean?) and we won’t discuss here.

Then we head into the first verse, which describes this youthful sensation with poetic lyrics:

First verse to “Blinded by the Light” by Manfred Mann’s Earth Band.

Each of these lyrics is pulled directly from Springsteen’s own life, with “Madman” being a reference to Vini “Mad Dog” Lopez, the original drummer for the E Street Band.

The “Indians in the summer” is a reference to his Little League baseball team, who played in the summer, and also of course the popular term used for periods of hot weather in the fall.

The “teenage diplomat,” Springsteen explains, was he himself, who was feeling down in the dumps and sick, putting his hat on. He feels the weight of a boulder on his shoulder as the years begin to pass him by, heavier each and every day.

Finally, he references the boardwalk of the Jersey Shore where he was living at the time, with its merry-go-round, and all the unpleasant, sneezing, wheezing, tourists and hooligans around.

The verse ends with the chaotic image of a calliope crashing to the ground before ripping into the chorus:

Chorus to “Blinded by the Light” by Manfred Mann’s Earth Band.

The chorus here introduces a woman to the story, suggesting that she is also young and energetic, feeling ready to take on the world at full speed but at the same time frozen in awe of the world at large.

Otherwise, you can enjoy some more “wrapped up like a douche” before the second verse comes in:

Some silicone sister with a manager mister
Told me I got what it takes
She said, “I’ll turn you on, son, into something strong
Play the song with the funky break”
And go-kart Mozart was checkin’ out the weather chart
To see if it was safe outside
And little Early-Pearly came by in his curly-wurly
And asked me if I needed a ride
Asked me if I needed a ride!

Second verse to “Blinded by the Light” by Manfred Mann’s Earth Band.

Here, the singer meets a woman who has undergone breast enhancement, who also has a manager. She seems to take a liking to this young man, and tells him to “play the song with the funky break”.

The second half of the verse is more obscure, and Springsteen sort of glosses over this part when discussing the song on VH1.

“Go-kart Mozart checking out the weather chart” implies that this is an artist, or driver who is fearful of taking a risk and is waiting for a sign that the time is right. Then comes along “little Early-Pearly in his curly-wurly” who offers him a ride.

Perhaps this “Go-kart Mozart” is another artist who is not afraid to take risks and takes a helicopter, or “curly-wurly” no matter the weather. He invites the singer to come along on his wild ride.

Outside of that, the meaning of the second verse is up to your best guesses.

Then, the chorus drops in yet again before heading into the breakdown, with an extended instrumental section, followed by the bridge:

Breakdown and bridge to “Blinded by the Light”.

In the breakdown, the young woman is described as down, but never tired, and going to make it through the night. This means that she is facing some hard times but she won’t give up, and she’s going to get through them in one piece.

The bridge describes the sophomoric notion of wanting to do risky things for fun, and especially the things that your mother warns you about. In this case, the warning is about staring at the sun, to which Mann replies that it’s where the fun is.

Although this could be seen as a reference to drugs, Springsteen himself has never been a drug user, so while it does lend itself to that interpretation, that was probably not the songwriter’s intent.

Next up, we have the third verse — ripe with more riddle-like lyrics:

Some brimstone, baritone, anticyclone, rolling stone
Preacher from the east
Says, “Dethrone the dictaphone, hit it in it’s funny bone
That’s where they expect it least”
And some new-mown chaperone was standin’ in the corner
Watchin’ the young girls dance
And some fresh-sown moonstone was messin’ with his frozen zone
Reminding him of romance
The calliope crashed to the ground!

Third verse to “Blinded by the Light” by Manfred Mann’s Earth Band.

There’s a lot to unpack in this verse, starting right from the jump with the adjective-filled first line describing the “Preacher from the east” in the second line.

Brimstone is a word for sulphur, used in the Bible with the phrase “fire and brimstone” to describe bad things coming, or hell. Baritone means deep voice. An anticyclone is a weather system that is basically opposite a hurricane, associated with high pressure and calm, fine weather. Use of the phrase “Rolling Stone” by be a reference to Bob Dylan and his famous song, “Like A Rolling Stone”.

All of this seems to describe a cryptic, deep-voiced and calm traveling preacher who comes to town wanting to get rid of the dictaphone, also known as the voice recorder.

What I’m gathering from this is we are now in a seedy place, and this preacher is up to some not-so-great things if he wants to get rid of voice recorders, perhaps so that nobody can make a record of the things he says.

Next, we meet the “new-mown chaperone” who is standing in the corner, watching the girls dance. This could be a reference to someone who manages strippers, or a pimp, with a fresh haircut, keeping an eye on things.

And then a “fresh-sown moonstone”, or young man who is either drunk or high, naive, or both, is falling in love, or “messing with his frozen zone” (his heart), because somehow this reminds him of romance.

It doesn’t make much concrete sense, but there is an aura about it that describes things starting to spin out of control, and maybe the fortune and fame is not what you hoped it would be. There is also the possibility that this song is about drugs, and this is where things take a dark turn.

Whatever your own personal theory may be, I hope you’re ready to get wrapped up like a douche again, because we have another hit of that chorus before barreling into the long final segment of the song.

Counter chorus to “Blinded by the Light” by Manfred Mann’s Earth Band.

The lyrics that begin with the part about “Scott with the slingshot” describe a young man who was looking to get laid, who finally found himself a willing partner in a drunk young lady. She tells him that her Dad is around and he suggests that they turn up the music so that he doesn’t get blasted with a shotgun.

That’s enough from me, on this one. Listen to Manfred Mann’s version of “Blinded by the Light” below, and Springsteen’s version below that. 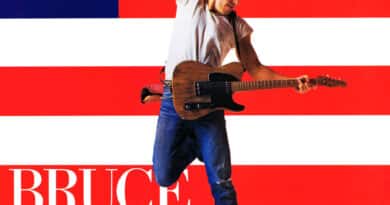 The Meaning of Bruce Springsteen’s “Born in the U.S.A.”