Chris Stapleton’s “Broken Halos” is a heartfelt modern country classic from one of the genre’s most talented songwriters. Released as a single from his 2017 album From A Room, Vol. 1, the track quickly struck a nerve with fans of thoughtful, somber songwriting, and many more who relate with the lyrics on an emotional level.

Stapleton introduced “Broken Halos” during Dolly Parton’s Smoky Mountains Rise benefit telethon in December 2016, which was held to benefit the lives, homes, and property lost in the East Tennessee Wildfires (though according to Setlist.fm, he did perform it once before that). It was clear right from the jump that it was a special song, making a powerful impact at the benefit and soon becoming one of Stapleton’s most popular and often-performed songs.

A few months later, during a February 2017 performance at Nashville’s Ryman Auditorium, with tears in his eyes Stapleton told the audience a story about what inspired “Broken Halos”:

This is a sort of new song, an old song for me, but it’s a song about people who have passed away before their time. I recorded this on a day where a friend of mine passed away from pancreatic cancer. He was the same age as me. We played little league together and stuff like that. He was 38 years old, so this is for my buddy Mike.

Chris Stapleton on the meaning of “Broken Halos”.

As Stapleton explains, “Broken Halos” is a warm light burning in remembrance of those who passed away before their time, leaving behind memories of the love and joy that they brought to others during their lifetimes. It’s a song for the dearly departed and those close to them who are still around to remember their presence.

Watch the touching early performance below, and read on for a verse-by-verse breakdown of the lyrics.

Stapleton wastes no time getting to the emotional meat of “Broken Halos”, opening the song with the chorus:

The lyrics use the angelic images of a broken halo, and folded wings to represent special individuals who met their end too soon. We can assume that Stapleton knew them before their halos were broken and when their wings could still fly, but now “they’ve all gone wherever they go”.

Here, Stapleton presents an uncertainty about the afterlife, as he isn’t exactly sure where these angels have gone, just that they are no longer around.

In the first verse, however, it’s clear that Stapleton at least knows where they came from:

Angels come down from the heavens
Just to help us on our way
Come to teach us, then they leave us
And they find some other soul to save

The lyrics here suggest that these special people were in the heavens to begin with, and they descended upon the Earth for a short time to offer lessons and guidance to those that are fortunate enough to encounter them during their lifetime.

After they have shared their wisdom and helped us along, they are gone just as soon as they arrived, though their teachings remain to be passed on to others.

The idea that these individuals were part of a greater mission to make a positive impression on the world is perhaps a source of comfort for those who are grieving the loss of a loved one who was also a mentor and a dear friend.

Next up is another passionate hit of the chorus before we move into the second verse, where Stapleton offers his own words of guidance to the grieving:

In the second verse, Stapleton says that there is no explanation as to why some people die an untimely death, and there is no sense in searching for one (“Turtles All The Way Down” comes to mind here). This is a message of acceptance and finding peace with tragic circumstances, so that you can continue to live out the virtues bestowed upon you by these angels during the precious lifetime that you still have.

With this, “Broken Halos” becomes a powerful beacon for people experiencing the loss of a loved one, and that is why the song has resonated with so many. Stapleton suggests that we must appreciate the lessons we’ve learned and find comfort with the passing of an angel from their life, as they have served their purpose and moved on to the great beyond.

The song closes with one final rendition of the chorus.

Listen to “Broken Halos” below. 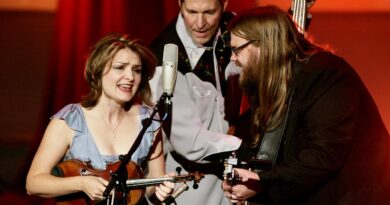 One comment on “The Meaning of Chris Stapleton’s “Broken Halos””