As the opening track to her Grammy-winning 2018 album Golden Hour, Kacey Mugraves’ “Slow Burn” brings a laid-back, nostalgic vibe and a sparkling appeal. The song describes Kacey’s philosophy on life, which is to take her own path and do things her way, enjoying the “Slow Burn” of the process.

Kacey’s philosophy is something that hits home with a whole lot of people, all of whom are feeling the pressures from family and society to be a certain way.

While she describes her own experience, the way it’s described sounds liberating and tends to promote self-reflection. This is what makes “Slow Burn” such a special song.

It makes sense for “Slow Burn” to have this sort of psychedelic energy, as Kacey wrote the lyrics for the chorus while she was tripping on LSD. She describes this experience in a 2018 interview with the NY Times, recalling how she sat on her front porch and thinking about her life when it all came together.

The lyrics to “Slow Burn” make subtle references to drugs and the counterculture, with even the title lending itself to the image of a joint. “Good in a glass, good on green,” Kacey sings, meaning that she’s got plenty of alcohol and weed.

The rest of the album also contains plenty of psychedelic references, with the bright colors everywhere in the lyrics, and especially “Oh What A World”, singing about “plants that grow and open your mind”.

“Slow Burn” also contains an older lyric borrowed from an old song of Kacey Musgraves’ called “Burn One With John Prine”, which is where “Grandma cried when I pieced my nose” originates from. This lyric references her family’s disapproval of her free-spirited lifestyle, but reasserts her wanting to “follow her arrow”, so to speak.

It was one of the first songs she wrote when she moved to Nashville and it’s been all but scrubbed from the internet, in terms of studio recordings, but there still exists a few live videos on Youtube, including one where she actually sings the song with John Prine.

She spoke about this in an interview with Stereogum in 2018:

Well, I never really did anything with that song “John Prine,” or “Burn One With John Prine,” whatever you wanna call it. And I always loved it and I always liked what it said ‘cause it really is true: My grandma did cry when I pierced my nose. I guess it could live in both songs, I mean, I’m the one who made it up so I was like, “I can borrow from myself,” you know?

“Slow Burn” is the song that starts the record off and I feel like it’s kinda one of my most autobiographical songs. It’s describing a lot of things about me and my mindset. It just seemed to really fit. But also, like I said, I wasn’t trying to be too discerning about the lyrics this time around, so I just grabbed it from that song and ran with it. I was like, “Some people might notice, and maybe they’ll think it’s kinda cool, or no one will have heard that other song anyway.”

Kacey Musgraves in a 2018 interview with Stereogum

Kacey Musgraves co-produced “Slow Burn” and the rest of Golden Hour with Daniel Tashian and Ian Fitchuk, the latter of whom also worked with SUSTO on their third album Ever Since I Lost My Mind, which is also worth checking out.

The production on Golden Hour really stands out for all of the delicate embellishments and things going on, which add to the layers of enjoyment. Pristine production is just as much to thank for the quality of “Slow Burn” as Kacey Musgraves incredible vocal performance.

The moment where the drums kick in says it all. “Slow Burn” is a timeless anthem of self-expression and one of the best country songs made in the last decade. It also marked a breakout to success for Kacey Musgraves, giving the song even more of a meaning when applied to Kacey’s career as a musician.

Listen to the marvelous “Slow Burn” by Kacey Musgraves below. 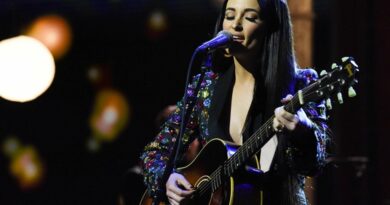