It is pretty rare these days to find a band that creates indescribable music, and Canopy Hands has done just that with their new album I Can’t Keep Doing This.  It has been three years since their last release, Whelm hit the web, and the wait has been well worth it. Where Whelm felt more like a straightforward but good indie-rock release, I Can’t Keep Doing This is a tumultuous experimentation with what has not been done yet with pop music, and the result is superb.

The album is produced incredibly well, and stands secure next to any pop album you can pull out of your hat. Every element of the record has a very deliberate texture, whether it be a reverberating vocal take from Thomas Hickman or Robert Johnson, with lyrics themselves that have a texture, taking on eternal subject matter, or the smoothest guitar or keys riff – perfectly sliding under the already layered and funky mix. The transitions, too, are just tasteful.

Growing up in Conway, SC., the band has been together for about 6 years and has been playing shows all over the state as well as recording 4 total albums to date, with I Can’t Keep Doing This being their first full-length release. Pretty good stats for those keeping count. Despite how you view competition in the art world, the music of Canopy Hands has kept a certain flair and a particular energy that has been rewarding to keep up with in my own personal experience.

This record is the product of a cohesive artistic force whose only weakness is its own atomized existence in a world of rigid predictability. Tracks like “Ethereal Jumpcastle” just take you to a colorful impressionist landscape of sounds that has a complex emotional feeling that comes with it. It’s easy to underestimate the complicated and dark undertones beneath these unique pop compositions when you’re busy bobbing your head or dancing, as the beat in “Dextro” harshly suggests doing.

“Maybe I’m Neither” is a raucously fun and inviting tune, with a great message behind it. “Lo-Brow” and “Falls” definitely take on a more soul-sounding style, but remain wholesomely Canopy Hands compositions. “Plum” is one of my favorites, but picking a favorite feels so wrong on such a diverse album, because “IKB” is just a true banger too. In other words, go listen to this album. 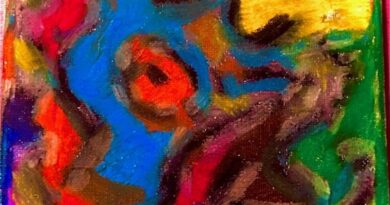