Kid Cudi came out of Cleveland in 2008 and hit the world with his debut mixtape, A Kid Named Cudi that introduced a sense of vulnerability that was foreign to the hip-hop genre at the time. His music has been extremely impactful on the greater music landscape, and his career has been closely followed in the public eye thanks to the deep meaning that he infuses within his music, all of which is taken from his own personal experience.

Nowadays Kid Cudi has been through hell and back, entering the public eye with his massive breakout album Man on the Moon: The End of Day in 2008 and soon descending into drug-fueled madness and buried depression. He entered a darker, more experimental period in the mid 2010s that culminated in the dark and jarring album Speedin’ Bullet 2 Heaven (2015) followed by a stint in rehab. It was around this time that Cudi also publicly spoke about his struggles with mental health for the first time, via a Facebook post.

2018 saw Kid Cudi starting to get back to making music that hits well with people, rather than dark explorations, with the Kanye West collaboration KIDS SEE GHOST. This was a sign of Cudi’s mental health improving, and was shown further with the comeback 2020 album Man on the Moon III: The Chosen, which brought things full circle nearly 15 years after the release of the first Man on the Moon album.

Things are once again looking good in the world of Kid Cudi, and we can only hope that he will continue to impress as he releases more music in the coming years. Even if he doesn’t, though, he has already released enough great music to make him one of the most influential artists of the past 20 years.

See what we’ve got for the best Kid Cudi songs below.

“The Prayer” was one of Kid Cudi’s earliest songs, and right away it had him coming out of left field by using an indie rock sample in Band of Horses’ “The Funeral”. This song was an underground hit for Kid Cudi and it had many listeners chomping at the bit to see what he would come up with next. It also had the added affect of appealing to fans of indie rock, who may not have been exposed to as much hip-hop prior to hearing this gem.

“Tequila Shots” stands out among the ranks of the massive 18 songs on Man on the Moon III for being one of the main bangers. It brings to the table a new style, while drawing reference to the laid-back depths of Kid Cudi’s earlier music.

2013’s Indicud had Kid Cudi injecting a new level of upbeat energy into his music, one that had only been dabbled in prior to this album. “Just What I Am” a banger that also falls into the box of great weed smoking music, like many of Kid Cudi’s other songs. The track features friend of Cudi, King Chip, who at the time had recently changed his name from Chip Tha Ripper.

A lesser known Kid Cudi song, yet one that still bangs is “Dat New New”, included as a bonus track on the single release for the much more well-known “Day ‘N’ Nite”. This is a blunt burning song if I’ve ever heard one, and the song even agrees with me with the lyric, “It don’t matter your race, just take a blunt to the face.”

KIDS SEE GHOSTS was yet another legendary collaboration between the two greats, Kanye West and Kid Cudi. They have been working together ever since Kanye first heard Kid Cudi’s mixtape in 2008. “Reborn” represents Kid Cudi’s re-entry into the public eye after spending a few years getting his mental health in order. He truly was “Reborn”, and he wanted everybody to know it.

“Mr. Rager” brings the central theme to the second Man on the Moon Album and is another excellent song that Kid Cudi made to connect him and his own emotional output with that of his fans. The song features a driving live drum beat and the use of an electric guitar, something that was new to Cudi’s sound at the time but that he would later make much more use of, with varying levels of success.

“Sountrack 2 My Life” contains the iconic opening lyric, “I got 99 problems, and they all bitches”, which is a play on the Jay-Z lyric about having no problems with bitches. This song is yet another example of the perfection that is the first Man on the Moon album, and offers a telling portrait of Kid Cudi’s reckless lifestyle at the time.

The exceptionally popular “Pursuit of Happiness” is one that Kid Cudi himself has spoken a lot about, mentioning that the song is still relevant in his own life. The song’s meaning is often confused with being about the positive side of a carefree lifestyle, when rather it tells a dark tale of drinking and driving and the regret and pain associated with drug abuse.

“Day ‘N’ Nite” was the first banger that Kid Cudi released, and later appeared on both A Kid Named Cudi (2008) and again on Man on the Moon: The End of Day. The song was groundbreaking for the same reasons that many of his other songs were groundbreaking, the fact that it had this relatable element in addition to being extremely catchy. The song speaks to all the kids up late at night, smoking weed and thinking about all their problems, many of which are due to dysfunctional relationships. Kid Cudi made himself out to be everybody’s friend with this one, and it brought him into the spotlight and kept him there.

“Man on the Moon” is the anthem of Kid Cudi songs, the one that defines his whole aura and everything that people like about him. There’s a reason why this song shares a title with the entire trilogy of his albums. In it he describes his creative process and his approach to making music, as well as his views on life. He brings that vulnerability as well as a recognition that his stuff is different, which is the very reason why he is so beloved. He truly did get the “last laugh”, as he says in the lyrics. That is very clear from where we’re standing, many years removed from the initial release of this song. 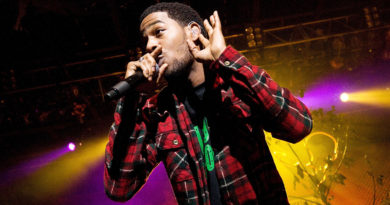 The Meaning of Kid Cudi’s “Pursuit of Happiness”