While Kid Cudi’s “Pursuit of Happiness” is a popular song at bars and parties (especially Steve Aoki’s remix), a closer look at the lyrics reveals that the song has a darker meaning.

Originally released in September 2009 as the third single from Kid Cudi’s highly influential debut album, Man on the Moon: The End of Day, “Pursuit of Happiness” stands as one of the strongest tracks on an exceptionally strong album, and still slaps more than a decade after its release.

Kid Cudi made a name for himself with his 2008 debut mixtape, A Kid Named Cudi, which included the banger “Day ‘N’ Nite” as well as “The Prayer” (which samples “The Funeral” by Band of Horses”), and more.

His music hit home with many people because it injected a layer of vulnerability and emotion into hip-hop music, something that had not been done in a long time, if ever.

While Cudi’s mixtape was a hit among those who kept up with hip-hop music, it was that first Man on the Moon album that made him a household name.

The album contains many incredible songs, including “Pursuit of Happiness (Nightmare)”, a song that chronicles a reckless night of partying and driving drunk. This is given away by the (Nightmare) tag in the song’s title, something that often goes unnoticed.

The first verse lures you in with what sounds like a fun time: “Crush a bit, little bit, roll it up, take a hit feeling lit, feeling right, 2am summer night.” However this quickly turns into “I don’t care, hands on the wheel. Driving drunk I’m doing my thing.”

What follows is an awareness of the poor decision-making that has taken place. Cudi makes a choice to disregard this knowledge and do what he wants anyway, “screaming out ‘fuck that'”.

It’s easy to see how listeners may miss the point with “Pursuit of Happiness”, as it is accompanied by a vibed-out beat produced by Ratatat and buttery backup vocals from MGMT, who bring us the memorable chorus that feels like a release of all negativity.

While this may be true, the true meaning of “Pursuit of Happiness” is about escapism, and the chorus speaks to that:

I’m on the pursuit of happiness and I know
Everything that shine ain’t always gonna be gold, hey
I’ll be fine once I get it, yeah, I’ll be good

Chorus to “Pursuit of Happiness” by Kid Cudi.

Later, in the second verse, things become more explicitly dark. Cudi describes waking up at 5am, with cold sweats as the substances he consumed all night long have worn off, and he’s left with the aftermath of a nasty hangover.

This hangover is accompanied by the negative feelings that Cudi had been suppressing with substance abuse, and he is left lying alone in bed to ponder it in sorrow.

“Pursuit of Happiness” is a song that feels relatable to anybody who has struggled with happiness in their lives, and especially those who have turned to substance abuse as a form of artificial happiness. Of course, it’s also an absolute banger and a song that Kid Cudi himself has confirmed is one of his favorites that he’s ever written.

We have seen now over the years that Kid Cudi has been on his own journey to happiness, and has personally struggled with many of the things that he addresses in his music. This is what makes him such a real artist and what gives his music that indescribable timeless quality, and “Pursuit of Happiness (Nightmare)” is a prime example of that.

Watch the music video for “Pursuit of Happiness” by Kid Cudi below. 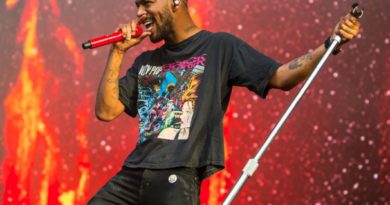