“Longview” is the first single that Green Day released from their now-classic 1994 album, Dookie. For many fans, this song about boredom and directionless existence served as their first introduction to the band. The video received lots of airtime on MTV, as did the other videos for “Basket Case” and “When I Come Around”. Needless to say, people loved it, and Green Day quickly became a household name.

The entire Dookie album is centered around a theme of wasted youth, and “Longview” conceptualizes this spirit in a way that feels relatable for many lost young souls, a category that once included a younger version of myself and certainly some of you reading this.

Bite my lip and close my eyes
Take me away to paradise
I’m so damn bored, I’m going blind
And I smell like shit

Chorus to “Longview” by Green Day.

For many years it was assumed that the band had named the song after the town of Longview, Washington, which they had passed through many times on tour in the years before Dookie skyrocketed them into mainstream success.

Then, in 2011, Billie Joe himself confirmed on Twitter that it was indeed named after Longview, Washington, stating that the title had been suggested by the band’s roadie Kaz Hope as that was the first town where they had played the song, dating back to 1992.

Apparently, when they had first written “Longview”, they were playing it out but had not yet come up with a name for the song. Longview residents knew all along, as they felt the song described their hometown. In reality, the lyrics to “Longview” can be descriptive of many small towns in America where it often seems like nothing ever happens, and the summer heat beats down upon a bored suburbia all day.

Billie Joe explained to Guitar Legends in 2005 that when he was writing the material that appeared on Dookie, he was living in one of these such towns — Rodeo, California:

I guess it was just living in the suburbs in a sort of shit town where you can’t even pull in a good radio station. I was living in Rodeo, California, about 20 minutes outside of Oakland. There was nothing to do there, and it was a real boring place.

Billie Joe Armstrong on the inspiration behind “Longview”.

In 1994, Green Day’s bassist Mike Dirnt told Bass Player Magazine that he came up with the recognizable bassline from the song while he had been tripping on LSD:

When Billie gave me a shuffle beat for Longview, I was frying on acid so hard. I was laying up against the wall with my bass lying on my lap. It just came to me. I said, ‘Billie, check this out. Isn’t this the wackiest thing you’ve ever heard?’ Later, it took me a long time to be able to play it, but it made sense when I was on drugs.

Mike Dirnt on the creation of “Longview”.

Watch the music video that made Green Day famous below. 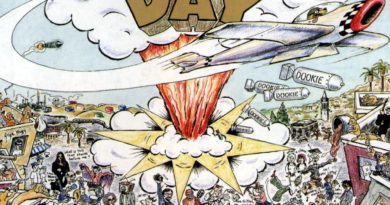