The Who’s “Baba O’Riley” is one of the British rock band’s many classic songs. As the opening track to their seminal 1971 album Who’s Next, the song has become an anthem for the unsettled youth, with the repeated phrase “Teenage Wasteland” being the most memorable and often-cited lyric.

In fact, many forget that the song is called “Baba O’Riley” and simply refer to it as “Teenage Wasteland” instead. However, while that was a working title for the song, guitarist and songwriter Pete Townsend ended up using the title for a similar ballad on his solo album Lifehouse.

According to Townsend, he was originally inspired to write “Baba O’Riley” after seeing the sorry state of the kids at Woodstock, where The Who famously performed alongside Jimi Hendrix, the Grateful Dead, and more in August of 1969.

He spoke about this in a 2009 issue of Guitar World:

The absolute desolation of teenagers at Woodstock, where audience members were strung out on acid and 20 people had brain damage. The irony was that some listeners took the song to be a teenage celebration: ‘Teenage Wasteland, yes! We’re all wasted!'”

Townsend has been known to contradict himself when discussing the meanings of his songs. On other occasion, he also said that the lyric “teenage wasteland” was inspired by the trash left on the field after the 1969 Isle of Wight Festival.

Whether its about Woodstock, Isle of Wight, or some other music festival, “Baba O’Riley” describes the restless ambition that one feels when surrounded by a crowd of people at a large communal event where people take psychedelic drugs.

It feels like you’re clinging on to the final moments of your youth, just fighting to stay alive, and of course trying to get as wasted as possible. And I’m describing a festival in the modern era. The conditions at Woodstock were known to be much worse, with three days of rain and chaos capped off by Jimi Hendrix’s legendary performance of “Star-Spangled Banner”.

Vocalist Roger Daltrey offered a different take on the meaning of “Baba O’Riley” in a 2018 interview with Big Issue, suggesting the song has a broader message that is also applicable to today’s youth — and not just because they like to get wasted, too:

My younger self would have loved Baba O’Riley. Teenage Wasteland speaks to generation after generation. The bridge – “Don’t cry/ Don’t raise your eye/ It’s only teenage wasteland” – if that doesn’t say more about the new generation, I don’t know what does.

The main advice I give youngsters is to be very aware of what you are getting into on social media. Because life is not looking down at screens, it is looking up. We are heading for catastrophe with the addiction that is going on in the younger generation. Your life will disappear if you are not careful. You are being controlled, and that is terrible.

Regardless of what you think “Baba O’Riley” means, there’s no denying that it’s an epic song and one of the most well-known in the classic rock genre. It has been included on many lists of the best songs of all time, including one from Time and another from Rolling Stone.

Listen to “Baba O’Riley” by The Who below. 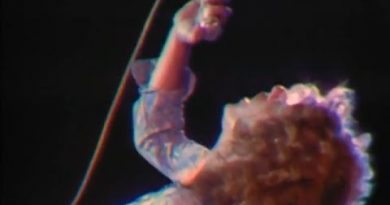