Third Eye Blind’s “Semi-Charmed Life” is one of the most memorable songs of the 90s.

It was the lead single from the band’s self-titled studio album, also a 90s classic, and it was an immediate hit, peaking at number 4 on the Billboard Hot 100 in August 1997, with 43 total weeks spent on the chart.

This was thanks to its upbeat, catchy arrangement, the nostalgic feel, and the fact that many people didn’t actually listen to the dark story being told by the lyrics.

If you listen closely, past the infectious “I want something else” you’ll find that “Semi-Charmed Life” is about being addicted to a substance that is one of just a handful of things that are more addicting than the song’s chorus.

Third Eye Blind’s Stephan Jenkins himself has said that the song is about crystal meth addiction, among other things, but you didn’t have to hear him say it to know that.

Right from the jump the song brings drugs into the story (well, after the doo-doo-doo, doo-doo-doo-doo‘s), with the lyric “I’m packed and I’m holding / I’m smiling, she’s living, she’s golden.”

Here Jenkin’s refers to “holding”, as in he’s got drugs on his person, and he’s doing them with this woman that he’s hanging out with.

As he sings about a beautiful sunny day in a fervor, he also quickly drops lyrics about chopping up lines and alluding to lewd sexual acts taking place between him and this woman.

This leaves us to wonder if it’s really a beautiful sunny day, or if the two of them are just locked in a room together putting speed up their noses: “The sky was gold, it was rose / I was taking sips of it through my nose.”

Soon the sunny energy turns to nostalgia and longing, and our hero admits that “Doing crystal meth, will lift you up until you break.” This he sings directly, but you wouldn’t notice the lyric amidst the boppiness in the way he sings it.

The addiction continues to take hold as the song progresses, and things become gloomy when the couple are depicted holding each other, broken and wanting to do nothing but more of the drug that got them to the sorry state they’re in in the first place: “Still it’s all that I wanna do, just a little now / Feel myself, heading off the ground / I’m scared, I’m not coming down.”

This juxtaposition between bleak lyrics and upbeat, poppy arrangements is the genius in “Semi-Charmed Life”, and many other Third Eye Blind songs (like “Jumper”, which is up next on the album).

Stephan sings in a happy way, and the band plays music that makes you want to dance, but the lyrics refer to things that are dark and depressing if you listen closely.

Watch the music video for “Semi-Charmed Life” below. 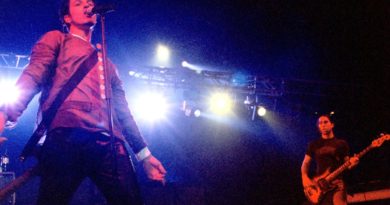 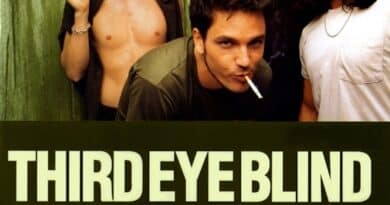