While Rebelution are generally known for their upbeat, feel-good reggae jams, one of their most well-known songs is the slow, moody “Fade Away”. The track comes from their 2014 album, Count Me In, and features lyrics that muse upon the fleeting nature of life and existence, and the all-encompassing power and beauty of Mother Earth.

“Fade Away” begins with gentle piano and guitar before vocalist Eric Rachmany drops in with the thoughtful first verse:

First verse to “Fade Away” by Rebelution.

Rachmany begins with an acknowledgement that all of this will come to an end. Whether he is singing about the world, his life, or a relationship, the result is the same — you’ll be alone. Then, he gives a toast to not knowing the future, deciding to savor it while it’s still around.

He dedicates his toast to the “Mother of us all”, meaning Mother Nature. We are all one with nature, because when we die our bodies will decompose and return to the earth. This shows a deep respect for nature, which goes hand-in-hand with the reggae spirit.

Next up is the chorus, lamenting the fact that time will take everything eventually, despite his best wishes that it would last forever:

Chorus to “Fade Away” by Rebelution.

In the second verse, the lyrics express love for mother nature, and perhaps also a special lover whom you might be sharing your existence with:

Second verse to “Fade Away” by Rebelution.

When he sings of waking up, the lyrics have a double meaning that could be both the eye of the sun shining through his window, and a lover by his side. He questions the meaning of life and doesn’t have an answer, but naively assumes he knows better. This is his way of acknowledging his faults, but knowing that it’ll be alright.

Then, he presents the image waking up to the eye again, this time paired with the image of a multi-colored sunset. It’s clear here that he is paying his respect to Mother Earth once again, acknowledging that she’s the one who gives him shelter, though there is still the possible interpretation that there is a lover involved as well.

Rebelution deliver one final chorus before the tune begins to unwind and “Fade Away”. We have a gentle instrumental break before Rachmany sings the final lyrics, a verse that is repeated twice:

Outro lyrics to “Fade Away” by Rebelution.

Thinking about the end of life can be stressful, and it’s also easy to get caught up in the meaningless problems of daily life and forget to enjoy things as they happen. These final lyrics are Rebelution’s way of acknowledging that, presenting a mindset that can help ease the pain — “Keeping it calm, until we all fade away and move on”.

Listen to “Fade Away” by Rebelution below. 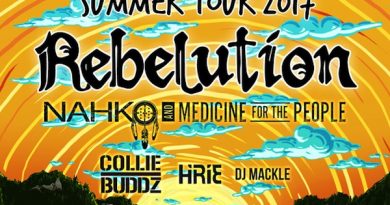