“Scar Tissue” by the Red Hot Chili Peppers is a song that looks at drug addiction and the solitary struggles that many addicts face on their path to sobriety. This is done over a feel-good guitar melody that serves to mask some of the darker metaphors that RHCP frontman and songwriter Anthony Kiedis uses to describe this experience, which he has gone through himself.

The track was the lead single from RHCP’s most famous album, 1999’s Californication, which featured the return of guitarist John Frusciante for the first time since 1991’s Blood Sugar Sex Magik. The album also spawned hits like title track “Californication” and “Otherside”, and the song’s title was also used by Kiedis for his memoir, which was published in 2004.

“Scar Tissue” was a hit upon release, peaking at number 9 on the Billboard Hot 100 and winning the Grammy for Best Rock Song in 2000, and it has proven itself to be enduring as one of the most well-known rock songs of the early MTV days.

Scar tissue that I wish you saw
Sarcastic mister know-it-all
Close your eyes and I’ll kiss you, ’cause
With the birds I’ll share

These lyrics introduce the song’s main idea of hidden “Scar Tissue” that people may carry around with them due to hard times in life. In this particular case, Kiedis is referring to his scar tissue as the demons of heroin addiction, hiding it on the outside with a sarcastic attitude so nobody knows.

Hence, he’s healing all alone, and it’s clearly not going well because he’s still up flying high with the birds, looking down at his life and the sorry state that it has reached.

Kiedis discussed this song at length in Scar Tissue, offering some insight into its background and origins by recalling a conversation with producer Rick Rubin, and the very moment when Frusciante landed on the now-famous melody:

“Scar Tissue” was another song where you open up the top of your head and it comes dusting down from outer space. Rick Rubin and I had been talking about sarcasm a lot. Rick had read a theory that it was an incredibly detrimental form of humor that depresses the spirit of its proponents. We had been such sarcastic dicks that we vowed to try to be funny without using sarcasm as a crutch. I guess I was also thinking of Dave Navarro, who was the King of Sarcasm, faster and sharper than the average bear.

All those ideas were in the air when John started playing this guitar riff, and I immediately knew what the song was about. It was a playful, happy-to-be-alive, phoenix-rising-from-the-ashes vibe. I ran outside with my handheld tape recorder and, with that music playing in the background, started singing the entire chorus to the song. I’ll never forget looking up at the sky above that garage, out toward Griffith Park with the birds flying overhead, and getting a dose of Jonathan Livingston Seagull. I really did have the point of view of those birds, feeling like an eternal outsider.

Anthony Kiedis on the meaning of “Scar Tissue” from his 2004 memoir of the same name.

While Kiedis does not specifically mention drug addiction as part of the song’s origin story, he details his own struggles with addiction in the memoir, so it’s easy to connect the dots. Some even go as far as stating that the title “Scar Tissue” is a reference to the scars that addicts may have from injecting their drug of choice.

The song contains many references to living the kind of degenerate lifestyle that comes along with drug addiction, including risky sexual encounters and shooting up in a bathroom stall. All of this is represented as a loss of innocence, and a distance from the easygoing days of childhood as Kiedis sings, “wave goodbye to ma and pa”:

Each time Kiedis offers another snapshot into the life of an addict trying to get clean, he comes back to the chorus about sharing a lonely view with the birds. This has meaning in the sense that addicts often relapse several times before finally achieving sobriety, often reaching a low point prior to success: “I’ll make to the moon if I have to crawl”.

“Scar Tissue” was released along with a music video that was directed by Stéphane Sednaoui and filmed in the Mojave Desert. The opening shot features John Frusciante driving the beat-up band down a desert highway in a 1967 Pontiac Catalina. Many view this scene as a metaphor for his return to the band, which was a very exciting moment for many fans of Red Hot Chili Peppers as he was responsible for many of the band’s most beloved melodies.

Watch the “Scar Tissue” video below 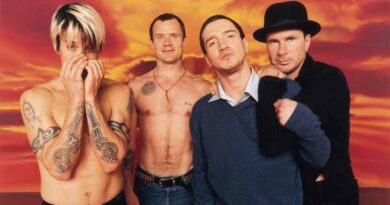