The Beatles logo is classic and simple, yet somehow it fits so well with their ethos as a band. The Beatles did not need a psychedelic logo, like the Grateful Dead, or a few cryptic ones, like Led Zeppelin. A clean text logo spelling out their name did the trick, with the T dropping below the main line of text being the main artistic embellishment. The music of The Beatles was simple, yet could also be psychedelic and cryptic, however always with a clean presentation.

While some might think that the Beatles logo was the result of careful consideration, the true story of the logo is much more simple. The story goes that one day in April 1963 Beatles manager Brian Epstein and drummer Ringo Starr went into a music store called Drum City, located on Shaftesbury Avenue in London, looking for a new set of drums for Ringo.

The drum kit that Ringo would purchase this day would be to replace his original Beatles drum kit, with the hideous logo that he painted on there himself, as pictured below.

Drum City was owned by a man named Ivor Arbiter, and it was the first drums-only music store to open in London. Once Starr and Epstein had chosen the drum kit that they wanted, they entered into a negotiation with Arbiter to receive the drum kit for free. Arbiter had apparently told Epstein and Starr that they could have the kit for free, but only if they painted the name of drum manufacturer, Ludwig, on the bass head.

Epstein agreed with the proposition, but he was only willing to agree if the drum kit would also read, The Beatles. Ivor said yeah, sure, and jotted down The Beatles logo, complete with the drop T design, down onto a piece of paper. The whole exchange took less than ten minutes, and the result was an early version of one of the most iconic rock logos of all time.

When asked about this encounter with Brian Epstein and Ringo Starr, Arbiter says he didn’t really know who the heck the Beatles were at the time, as they had yet to really break out:

I had a phone call from the shop to say that someone called Brian Epstein was there with a drummer. Here was this drummer, Ringo, Schmingo, whatever his name was. At that time I certainly hadn’t heard of the Beatles. Every band was going to be big in those days!

Arbiter was paid a measly 5 pounds for the logo, and it was subsequently painted onto Ringo’s drum kit by a local sign writer named Eddie Stokes. The result was the first of seven drum kits that Ringo would play with the Beatles between 1963 and 1967, all of which featured the now-famous drop T logo.

Ringo played this first drum kit, with the original logo design up until February 4th, 1964, when the kit was retired after the band’s show at L’Oympia Theatre in Paris.

While The Beatles were finishing up their final European tour before their American debut, Epstein returned to Arbiter and requested that he make up a second drum head for Ringo, one to take with him on tour in America. The second drum kit made its debut on February 9th, 1964, during the band’s famous debut on The Ed Sullivan Show.

The logo on Ringo’s second drum kit was painted by the same Eddie Stokes but it was much bolder, and more prominent, taking up almost the whole width of Ringo’s drum kit. It was this same logo, with slight modifications from here, that appeared on every other drum kit that Ringo played with The Beatles.

While The Beatles logo was certainly iconic, it never actually appeared on any of the band’s album covers or promotional artwork. It was reserved entirely for Ringo’s drum kits for a long time, and The Beatle’s Apple Corps didn’t even trademark the logo until the 90s, presumably so they could own the sole rights to mass-produced t-shirts and other merchandise.

For more on the Beatles logo, check out the feature that Vinyl Rewind did on it in 2018: 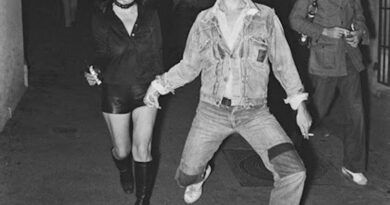 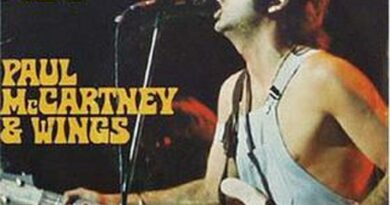 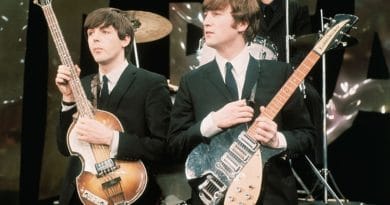 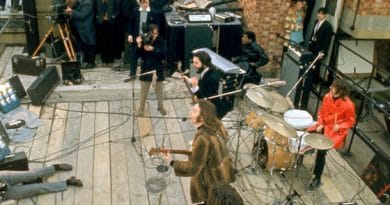 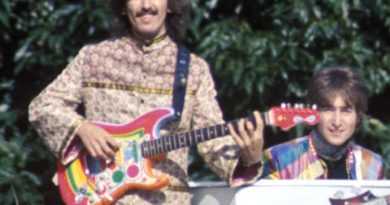