Today, NYC-based singer-songwriter Samia releases the music video for “Waverly” off her 2020 full-length debut The Baby. The album was her first full-length release, but Samia herself has been surrounded by the entertainment business for her entire life. Her parents are actors Kathy Najimy and Dan Finnerty, and she has been acting and singing ever since she was a kid. The Baby is a coming of age album based loosely in that world, but the feelings of being lost and confused that she conjures through her vocals are ones that are easy to relate with during these strange times.

On the surface, “Waverly” tells about trying to become friends with a waitress who works at a restaurant in Manhattan’s East Village. However beneath the surface seems to lurk a story about fear and insecurity, of not trusting yourself enough to know that you are valued. The video is pretty strange, and shows Samia with too much pasta for her own good. When she finally has friends to enjoy the pasta with, she doesn’t seem to want it.

Watch the video for “Waverly” by Samia below. I also recommend the rest of the album, and especially the darkly poetic final song “Is There Something in the Movies?”. 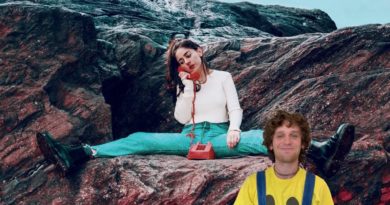 Briston Maroney – “Is There Something in the Movies?” (Samia Cover)