These past 4 years since Antony Potts (A.K.A. PHAZE GAWD) dropped his debut project have been like his very own anime training montage. In 2018 he released a collaboration with AMWA (a man with antlers) called Dark Dreams. Before the pandemic, he played countless shows around the Southeast. He even started a YouTube channel where he reviewed new music. Now he’s stepping out of the dojo with his new solo project AyoPhazoGo!

The first track opens with a short introduction from a character named Megumi telling the listener, “You are only as real as the people who believe in you. Praise PHAZE GAWD.” This positive energy is a sharp contrast from the “total domination” he raps about in the first verse only seconds later. Potts showcases different dimensions of his personality throughout the mixtape, but he makes sure the listener sees them all from the beginning. “AyoPhazoGo!” showcases creative lyrics over a sinister beat guaranteed to test your subwoofer.

The opening track ends with a fun skit that leads into the charming “Chop Chop”. Here Potts rhymes about his ambition and how he isn’t going to patiently wait for the things he wants. He’s going to go out and get them.

Production for AyoPhazoGo! Began in March 2019 when Potts met producer Monk Beatz from Brazil. The two of them started working together on this project, creating something that feels extremely cohesive throughout. Their partnership helped Potts’ lyrics and personality shine through on each track.

By the end of track two, the listener has a feel for Potts’ skill as a writer. The next track, “CLT Zodie Freestyle”, showcases his creativity and quick thinking. This high-intensity energy is maintained until we reach “Motorola”. This track slows things down and shows a softer side of the PHAZE GAWD, demonstrating yet another dimension of his personality.

When he dropped the first single, “Trap Zatoichi”, in November 2019, fans could immediately tell how much of his personal passion Potts was bringing to this project. This track (and the whole project) is heavily inspired by the Japanese samurai and anime movies that Potts grew up with. Every element carries that influence, from lyrics to interludes to beats.

For “Up & Stuck”, Potts brought in fellow Charlotte MC Keychainz Hefner to contribute a smooth verse which relaxes the listener for another entrance from Megumi. She says, “Face your demons like you face your reflection. The two are often one and the same.” This phrase could be seen as the philosophy behind the entire project. Potts showcases his multifaceted personality in each song, showing the good, the bad, and everything in-between.

While Potts would classify his music under the hip hop/rap genres, he doesn’t like to box himself in with labels. Throughout this project, he incorporates elements of pop and R&B, showing how versatile he is. AyoPhazoGo! is a reintroduction to an artist who’s been cutting his teeth in the Charlotte hip-hop scene for years. It shows that he’s not someone to be overlooked and states that he’s determined to get everything he’s shooting for.

AyoPhazoGo! is available on all major streaming platforms as of August 28th, 2020. 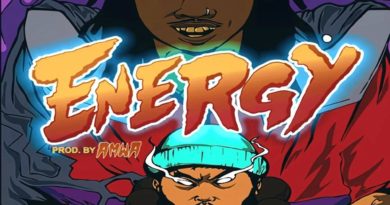