On August 28th, Tennessee musical group Future Crib gifted the world with their latest project, Silverdays. The 12 minute album consists of 9 songs recorded and produced by the group at their home in Woodbine, Tennessee. Silverdays includes songs that cover a plethora of styles, dynamics, and moods, ranging from experimental folk to field recordings and back to their energy filled electric rock songs that the group is known to deliver live. While each song creates its own sonic landscape through different instrumentation, the whole album is threaded together with the work of each of the members to create a piece that reflects their time together at home.

This is displayed easily through the Motion Picture Art Book that was released to accompany Silverdays. Scenes in the video show the band’s daily routine of cleaning their house, cooking breakfast, taking care of their lawn, and completing projects before convening at night to play music as a group. The themes of self-care and improvement that are presented musically are shown through the metaphor of keeping up with household chores.

For an album so short, the changes throughout are fluid and dramatic. The opening track, Feeling Exchange, touches on themes of beginning change within oneself. “I’m trying to change/ I don’t know where to start, I don’t know how to begin.” The song is filled with melodic synth lines, energetic drums, fun percussion, and guitars nestled in the background, twisting and feeding back. Immediately after, you are dropped into a recording of what sounds like the band discussing the damage done to a broken plate. This only serves as a quick break before Noah Pope launches you into the next song: “Iceberg”.

“Iceberg” contains similar textures as the opening tune: organ-like synth tones, energetic drums, and group harmonies. Once you feel comfortable with the hook: “unbelievable, unbelievable…,” you find yourself already at track four. “In The Kitchen” sounds like it could be a Wilco deep cut via Yankee Hotel Foxtrot. The atmospheric piano sounds mixed with the low vocals and tape warbles send you to another world. Johnny Hopson sings: “Flower Family tree/ Is true love waiting for me?/ You’re losing your voice now/ Through the work and the fuss/ But new love could be waiting for us” There is lyrical optimism present against minor musical textures.

The album brightens back up once more with “Summer Spice”, which has Noah Pope capturing nostalgia of asking a friend to “get up to play.” It’s a pleasant song that feels like summer movement. The strummed guitar resembles either driving through your neighborhood or skating down the sidewalk on a windy day.

“A Trip To Mind Mumbling” is a slice of thought. It captures a head full of voices and curiosity about what everyone else must be thinking: “If I could I’d open my eyes/ And see into your head/ What ya thinkin?/ Won’t you answer?/ Keep on calling your name ’till it’s over.”

Silverdays is rounded out with the last two songs, which fall effortlessly into each other. “Love You Gesture” lifts all of the energy from the album back up to a 10 with no lyrics except fun “woahs” and group drumming. This is where influence from Animal Collective is most prominent. The final shout leads into “Silverdays”, where Noah Pope closes the album on acoustic guitar with refrains to the familiar synth tones from the top of the album. Lyrically, it shows gratitude for friendship and the golden days of past while appreciating the rest of the silver days that are yet to come. “Silverdays calling your name again/ The golden age is gone and now you can’t pretend/ A hundred reasons why you deserve to win/ But nothing can compare to calling you my friend”.

Overall, Silverdays is a short and sweet project that touches on the many emotions that come along with living with friends. The main message of the album, self-care, shines through on each track. This message is something that we could all use in this time. The album swings from ambient to energetic from song to song while still maintaining a cohesive style. Future Crib manages to do all of this in 12 minutes, which leaves the listener asking for more. Some may say that the album is too short, but the length of the work only speaks to the message that the days of gold are also fleeting. Enjoy the short and sweet moments while they last, and replay them as often as you can. 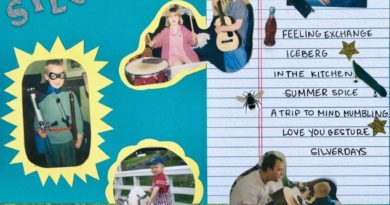