This morning, Columbia’s Real Work released a follow-up to their 2018 self titled debut, an EP called Where Did We Begin. The band, which includes of former Baumer members Kenny McWilliams and Chad Rochester, along with former NEEDTOBREATHE drummer, Joe Stillwel, is a production treat for the Columbia music scene. Frontman Kenny McWilliams is the owner of Archer Avenue Studio, which has seen the likes of All Get Out, Valley Maker, and more. With Real Work he tries his hand at fronting a band.

Where Did We Begin is four new tracks from Real Work. Much like their self-titled debut, the tracks are well-made rock songs slightly hinted with an early 2000s emo vibe. I’d place Real Work in a genre category with bands like Manchester Orchestra and All Get Out, which makes sense because like I said earlier Kenny has worked with All Get Out in the past.

Real Work will celebrate the release of Where Did We Begin tonight at Columbia’s New Brookland Tavern. The show is a celebration of 3 bands who released EPs this week: Real Work, The Lovely Few, and Levvy, with special guests Ghosts of the Kodiak.

Listen to Where Did We Begin by Real Work below. 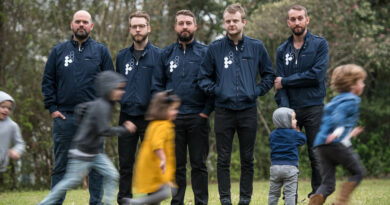