The phrase “don’t fix what isn’t broken” comes to mind when listening to Down Under’s new track “Insomnia.” It’s a good thing too, because they do indeed break it – they break it down, HARD, three times before the song is over. Reminiscent of mid-2000s Job For A Cowboy and early 2010s Chelsea Grin, Down Under is maintaining a sound that I consider the absolute heaviest to ever hit modern metal. It goes without saying that Down Under is the heaviest band in the Lowcountry, riding off of their City Paper Music Awards “Best Metal Band of 2018” title.

Starting off with a tired advertisement sampling incorporation, the band introduces a themed riff that runs throughout the song, featuring modifications and embellishments that would make Beethoven throw up devil horns. The drummer begins by dissecting this theme in various ways, playing off rhythmic elements of root notes before giving way to the inescapable blast beat. Capping with an ejaculate-inducing drum solo, the band takes off on a filth-ridden journey through cut time and pig squeals, keeping the main theme in their back pocket.

With a horrid second sample comes the first breakdown – sparse China, drop C(?) chugs, and grueling low growls. If this came on live, the real ones would be attacking the pit while the posers ran for fucking cover. After two rhythmic developments, a 2nd breakdown comes, dropping the tempo yet again and solidifying Down Under’s claim to heaviest band around. But dammit, they aren’t done there. With some high screams that induce wincing and stank face, comes a searing riff and blast beat that modulates the tempo upwards again, refocusing into chaotic amounts of energy.

From this point on it seems the theme is lost in favor of the tasty new riff, which shortly gives way to rhythmic elements that are preparing for one thing: another breakdown. At four minutes into the song, the final breakdown comes in, inducing headbanging and slam dancing that is sure to injure necks and pull arms out of their sockets. With one more rhythmic development to keep the energy moving, and a small trench-digging bass feature, the track is done, and you can rest.

While I personally wish off-topic metal sampling would die in favor of more modern life-relevant samples (take a cue from hip-hop’s voicemail samples), I can’t hold it against Down Under to call back their metal ancestors for this track. Musically, it seems the need to break it down overtook the first riff that caught my ear, and I wish they would have reintroduced it before ending the song. HOWEVER, this is pretty damn nitpicky, and I won’t allow these thoughts to deter from the fact that the song is fucking brutal, and I would, and have, hit the pit when Down Under plays. I give it a Very Chill 4/5. 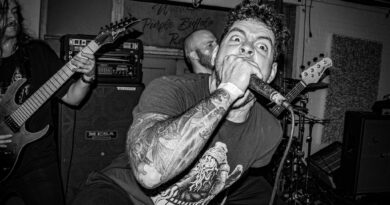