According to the band, the deal with the Seattle-based boutique label Spartan Records came about somewhat randomly. Barnes recalls having the record mostly finished, and one day sending an email over to Spartan Records, with a few good buzz words to get them interested. The team over there “must have been in a good mood,” Barnes says, and they gave the album a listen and liked it enough to bring Florida Man onto the roster.

Much like Florida Man’s 2017 self-titled debut, Tropical Depression was recorded at Columbia’s Jam Room Studio with engineer Zach Thomas, who also mixed and mastered the album. The band went into Jam Room for a full day and tracked out all the instrumentals, and later went into a friend’s home studio to record the vocals. Florida Man self-produced the album, which helped them keep a raw sound without adding too many bells and whistles.

“We had enough confidence in these songs to coach ourselves through. We didn’t really talk about a new direction or a sound,” Barnes says. “I’ve been in projects before where you try to re-invent yourself every time. It was still a fresh enough sound to us, and the band was new enough that we just kind of went for it. If some stuff sounded similar, we liked the vibe that we already had.”

Tropical Depression toes the line between heavier music genres like hardcore and metal, and a more melodic, pop-oriented vibe that you’d get from the softer end of the spectrum. You’ve got songs like “Dirt” that border on hardcore punk rock, and then you’ve got a song like “Holy Roller”, which is centered around a catchy, hard rock guitar riff that gives you something to nod along with.

“We all like heavy music a lot, but we also like things that have hooks,” Barnes says. “It’s not catchy in the sense that you can throw it in the top 40 or whatever.”

“There’s a balance there that we don’t even really talk about. I think we all just like that side of music, too,” Barnes continues. “We could write something that’s just like, brutal as fuck, but like, for this band it feels right to add in a little bit of poppiness. It’s been in there since the get-go, and I don’t really know what it stems from.”

This balance is what helps set Tropical Depression apart from other heavy bands in South Carolina, and it’s also what helps Florida Man appeal to a wider audience. Yes, it is heavy music, but it’s also got hints of the lighter side of music that allows them to avoid being put into a restrictive genre box.

“I believe that personally, we try to attract everybody,” Jim says. “Especially with the riffs, you know. I’ll never forget this one time we played at Burns, and we played “Holy Roller” and everybody went from going crazy to just like, bobbing their heads.”

“Some guy’s bobbing his head and trying to push someone at the same time,” Barnes laughs.

The balancing act of Florida Man continues with the lyrics, which are written collaboratively by Jim O’Connor and bassist CJ DeLuca. Jim works as a cook (he was actually doing a pop-up at Big Gun on the day of our interview), which in Charleston means that he works a ton of hours and deals with tourists on a daily basis. The lyrics reflect that blue-collar lifestyle and the grunge of working long hours. Working to survive in a city with such a high cost of living, while also finding time to book shows and take off work is a balancing act in itself, and thus is woven deeper into the fabric of Florida Man as a band.

“I would risk $400 off a paycheck to play music out of state any fucking day,” Brandon says.

Part of the appeal of Tropical Depression also comes from the branding behind it, which according to the band was mostly the label’s doing. The album cover is a close-up detail shot of an orange, which naturally ties itself to the band name without having to touch that Florida Man cliché that has been popularized by websites like the Onion. The vinyl record is a picture disk showing a sliced in half orange. Barnes and the rest of Florida Man know that building a brand might be seen as “so not punk”, but understand that in this day and age you have to give people something to latch onto. Check that vinyl out on the Spartan Records website here.

Florida Man will be touring in week-long spurts for the majority of 2019, starting on Friday night at The Royal American. Facebook event for that Royal show is here. See full tour dates as of now on the poster below. Listen to Tropical Depression when it drops this Friday, May 3rd. 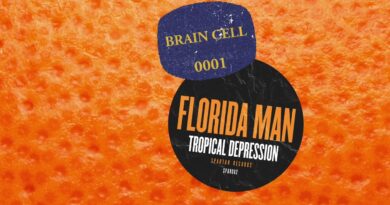 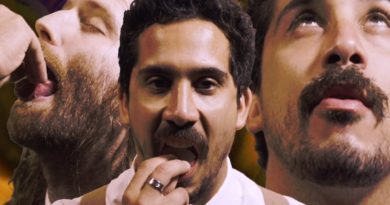 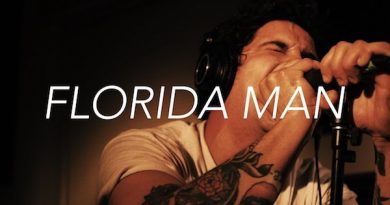