Haunters is the new solo project of Charleston punk Jonathan Minor. Fittingly enough for a project called Haunters, the full-length debut, listless//stranded will be released on Halloween via Real South Records. The first Haunters single, “Blend In”, was released last week, and shows Minor making a shift away from the heavy punk rock that he’s played in the past and into a more melodic territory. That shift isn’t likely to be permanent, though, because according to Minor, he’ll always be a punk at heart.

This morning, we’ve got the second single, “More Than Just A Crush”, off listless//stranded available for your listening pleasure. This one doubles down on the shift away from traditional punk rock song structures, diving even deeper into the emo side of things.

As Jonathan says in the interview you’ll find underneath the stream, he is truly wearing his influences on his sleeve here. “More Than Just A Crush” is here to tell you just how many times he’s listened to that first American Football album.

The listless//stranded album release show is lined up for Tuesday, November 6th at The Royal American. Joining Haunters that evening will be Catholics, Kissel, and Living Dead.

Stream “More Than Just A Crush” by Haunters below. While you listen, scroll down to learn about the time that Jonathan’s former band Four AM Friends opened for The Murder Junkies (sans GG Allin), and the hearing loss that comes from years of playing unadulterated punk rock.

You’ve spent a lot of time playing in various punk bands around South Carolina. How did you first get into the punk scene?

Myspace.com. Seriously. I started a band in high school with some friends who liked Anti-Flag, Blink-182 other hyphenated names. But when that started to suck and I wanted to really play shows and stuff it was around 2005 / 2006. The hay day of Myspace. I met my old friend Kerri Beth on that stupid site, and she liked The Descendents as much as I did, so we started a band with her brother called The Sporadics. We’d use Myspace to book shows where ever we could. Pretty soon we were playing Ground Zero in Spartanburg all the time, and playing with bands we had no business opening up for. One time we opened up for Unknown Hinson, and that’s still hilarious and awesome to me.

Of course young punks love to play houses, and we did that in addition to seedy dive bars, pop-up venues and record stores. Kerri met her husband at one of those house shows, so I guess it worked out pretty well. I’ve booked tours and shows all up and down the east coast and more because of Myspace, and then Facebook.

So I gotta say social media has been pretty good to me in that regard. I’m still a nerd, but a lot more outgoing than I was when I was fresh out of high school. I don’t know that I would have kept playing in bands if I didn’t have an internet connection to find friends with common interests. That holds true to today.

What does punk mean to you?

Community. It’s about finding people who are like minded and challenging the status quo. Specifically oppressive groups and institutions. Sure there’s a genre of music that is considered punk. I love the Ramones and the Clash and will till I die, but it’s a lot more than music to me. One thing it sure as hell isn’t about to me is clothes and edgy attitudes. It’s definitely not about violence either.

It’s a shame that in many ways the punk and hardcore music communities are still viewed as “boys clubs,” but the times are changing and more POC and non-men are playing and participating than ever. It’s really exciting to see all the great bands out there with faces that don’t look like mine. I have to shout out my friends MeanGirls from Austin, TX for playing amazing music and exemplifying what I think punk is really about.

Do you have any long-term damage from playing punk rock?

I have hearing loss in both ears, which is a nightmare as a musician and music fan. WEAR EAR PLUGS AT SHOWS! I also got dropped really hard on my back when I was crowd surfing some years ago, and it hasn’t been right since. Take care of yourselves out there, it may feel like it when you’re in the pit and away from all of the bullshit of life, but we aren’t invincible.

What’s the closest you’ve been to GG Allin territory?

One time my old band Four AM Friends opened for the Murder Junkies. I didn’t want to play, but I got talked into it. I made the best out of it, even though I hate GG Allin and everything he stood for. They sucked by the way.

From what I’ve heard so far, Haunters is more in the pop-punk/emo realm than most of your previous projects. What can you tell me about that

It’s closer to music I’ve been wanting to play for years. My talent level is catching up to my ambition in many ways and so I’m able to have songs in my mind and then when I write and record them it’s a more accurate representation of what I wanted when it was just a thought. I definitely wear my influences on my sleeves, and just because this record has a certain feel doesn’t mean I’ll be continuing to put out records that sound the same as I go.

I had to cut a song from the record that didn’t fit because it was really screamy and it didn’t make a lot of sense next to the other songs. That will probably go on a follow-up EP or album with more hard-hitting songs. I just want to keep people guessing. If you like it then that’s cool by me.

The truth is I’m a sucker for 90’s emo. It’s probably my favorite sub-genre of music. Jawbreaker, American Football, Braid, Cap’n Jazz, Mid Carson July, Mineral, Promise Ring, Commander Venus, and believe me I could go on forever. So since I didn’t have anyone else telling me how they think my songs should sound, that sound shines through a bit more.

Would you say you’ve retired from punk at this point?

Never . It may get more melodic, but at I’ll always be a punk. In I’m actively trying to start another band in the vein of Fugazi and Twelve Hour if anyone is interested.

What’s the most exciting thing for you about the Haunters project?

It’s not a band, so it won’t break up. I also like how I can book a concert, and then that specific show gets to have a unique line-up. For the record release show, my friend’s DJ Edwards (Real South Records runner who played on my album) is playing drums, and Will Bragunier (Living Dead) is playing the bass. Then I’ve got a show coming up in December out of town and I’m thinking I may be just playing with a keyboard player as a two-piece.

Mac McCaughan from the band Superchunk / Merge Records put out an album under his own name in 2015 called Non-Believers. Right around the time that it was coming out, he goes into a local NC radio station, KEXP, to perform some songs from the record. Now on that there’s a ton of synth and drum machines and stuff, it’s inspired heavily by 80’s new wave. He mentions before they play that he had a lot of fun recording it, but performing that kind of music was not something he’d ever really done before. So he got some friends together to do “indie-rock” versions of a bunch of songs from the record. What stuck out to me was when he said that he always loved when bands presented songs in different formats and different ways live.

Anyway, it was very inspiring to hear him say that and I have taken it to heart when considering what I do with Haunters as a solo-project that records stuff like a full band. So THAT is what’s exciting to me about it. I can do whatever I want, and then write a really drawn out explanation as to why that’s cool to me. 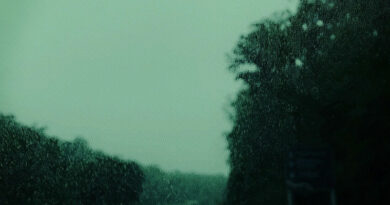