Sleeping Policeman is an alternative rock project based in Myrtle Beach that serves as a creative outlet for songwriter Charles Grace. Starting in 2010, Charles has released three studio albums, and the fourth album, The Bride in the Wilderness is slotted for a June 10 release. The new album is a concept album inspired by the Old Testament’s Book of Job. The first physical copies of the record will be available at Kilgor Trouts on June 10th, and all purchases will come with a 11 x 17 poster.

On June 11th, Sleeping Policeman will host an album release show at the historic Cooper House, where physical copies of the album will be available for purchase. The show will feature acoustic, listening room style performances from Candice Marotta, Alex Muller, and Charles Grace. Tickets are $8, and Counter Culture coffee will be served. Sleeping Policeman will play several more shows this summer in support of the new album, with dates to be announced in the coming weeks.

We linked up with Charles to talk about the new album and Sleeping Policeman’s plans for the summer. Read the interview below. And while you’re reading, you might as well stream the album’s first single “The Wilderness”. Enjoy.

‘The Bride in the Wilderness’ is the fourth studio album from Sleeping Policeman. What made you decide on a concept album for this one?

It’s ironic thinking back. The decision to write a concept album was actually a response to a playful challenge from the drummer in my band at the time, Peter. He knew that I had been reading and studying the Book of Job alot, and I hijacked the car stereo on tour, playing nothing but Coheed & Cambria. So he said, “You know, you never shut about this Job story! Why don’t you just write a concept album about it?” Having no idea what I was getting myself into, I took him up on the challenge.

Why the Book of Job?

I began reading the Bible regularly about four years ago. When I read something, I am the type of guy who like to dig deep and get all the backstory I possibly can. Right after I released Anticipation in 2014, I came across the Book of Job. I kept digging up different perspectives and other people’s perception of Job, believers and free thinkers alike. The opinions were polarizing, but nobody I came across knew anything pass the first two chapters. It was like everybody read the spark notes before they took the test, but nobody had the whole story. So I wanted to find out for myself what this whole Job story was really about. Was it just a book about intense suffering? Did God really just make a bet with Satan and punish a guy for no reason? Was there any light at the end of the tunnel? I wanted to gain a thorough perspective directly from the text.

How often did you refer to the Bible during the songwriting process?

Well, there are some references to Jeremiah and Psalms, but this record was mostly inspired by the Book of Job. Initially, I approached this album as a playwright or a puppet master, you know, the outsider looking in. I wanted to re-tell this fascinating story that had already been passed down for thousands of years. As the creative process continued, I quickly found out that I was no longer just an outsider. I was no longer Shakespeare staring down at Romeo and Juliet; I found myself right in the middle of the story. My life began to run parallel to the protagonist. I was not going to get away with just writing about Job, I had to experience my own trials, tribulations, and triumphs in order to fully understand the story and make it mean something to the listener. Although it is a concept album based on the Bible, there is a parallel between my personal life and the concept throughout the course of the album. For example, the song “August Fisherman” is inspired by both the character Elihu and my best friend, who happens to be an atheist. I wanted to write songs using themes which would resonate with anybody, regardless of their worldview.

What role does religion play in your life?

Ooh! This is a good question. If you asked me this question six years ago, then I would have told you it was all a bunch of hog wash and a waste of time. I used to think of it as this corrupt institution that was only interested in what went into the offering plate. However, my perspective has changed drastically. The term “religion” is a mixed bag. If you ask 100 people, you will get 100 different answers. My personal experience has shown me more than anything that it is about meaningful relationships and intentional community with a common purpose. Nothing that I have today would be possible without the people that inspire me and encourage me to pursue my dreams. So in that sense, I would say religion plays a central role in my life.

How has your life changed between now and the release of ‘Anticipation’ in 2014, and how would you say that has affected your songwriting?

Anticipation was written during a transitional time of seeking and discovery. I was still forming my new identity creatively and personally. I never in a million years thought that the central focus to my creative expression would become my faith experience, but that is how it played out. As a songwriter, I have always written about what informs my life. I liken it to any major life event: marriage, a child being born, or experiencing the loss of a loved one. For a young man such as myself, that major life event was my conversion to Christianity at twenty-two years of age. The line between the sacred and the secular faded over time. Much like my older brother and I talking about him becoming a new father, it has completely transformed and flavored the language I use in every area of my life, especially in my songwriting.

What are you looking forward to most about the release of ‘The Bride in the Wilderness’?

You know, it has been such a long and trying journey to get to this point. I am just ready to share these songs with people outside of the producer and myself. There was a time when I thought this album was never going to see the light of day. I went through a serious depression following the recording process. I lost any sense of drive or motivation. Hope had become a tired old acquaintance. To arrive at this point and see it all coming together is one of the greatest victories I have ever experienced. I am most looking forward to connecting with people through these songs and hearing about their own personal wilderness.

Can you tell us about some of your upcoming tour dates? Anything planned in Charleston?

Tour dates are definitely in the works throughout the summer in the Carolinas and Georgia. Right now, I have shows booked in Myrtle Beach and Hartsville through July. I am in the process of booking a show at The Vinyl Countdown in Charleston for late June or early July with very talented band from Summerville called Nuvo Blu. I will be updating my calendar regularly on ReverbNation and BandsInTown as more shows are confirmed.

Mark your calendars for June 10th so you can get your hands on The Bride in the Wilderness right away, and keep your eyes peeled for more information regarding Sleeping Policeman’s summer tour dates. And don’t forget to tell your friends! 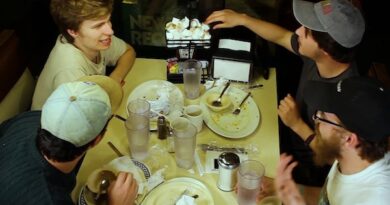 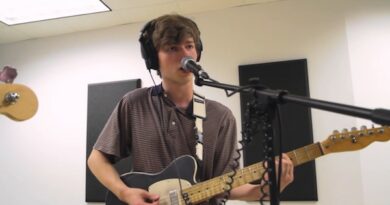